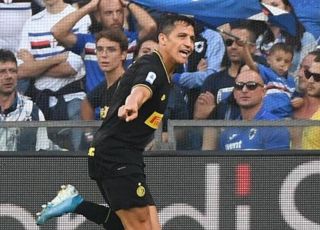 Alexis Sanchez has been talking about his loan move move from Manchester United to Inter Milan and how it helped him.

The Chile international is quoted as saying the following to UEFA.com — and it puts doubt whether we’ll see him in a United shirt again, not that there will be many wanting that to happen.

“It was a bit like falling in love with football again,” Sanchez said, as quoted by One Football.

“I already knew the coach and some players, and I think the club is preparing something nice for the future.

“If I’m not mistaken, Inter haven’t won anything for seven or eight years.

“Yes, it was a bit like finding love for football, together with the desire to win something with this club.

“I believe the coach wants to win everything. You can see it from how we train and how we play games. He conveys his desire to the players and is positive for both the club and the team in general.”

Sanchez had an eventful full debut for Inter Milan at the weekend as he scored before later being sent off in his side’s 3-1 win at Sampdoria.

The on-loan Man Utd forward was given his marching orders in the 47th minute for a second bookable offence after an apparent dive.

Thankfully for manager Antonio Conte, Sanchez’s dismissal did not cost the Nerazzurri as they claimed their sixth successive win to maintain their two-point lead over Serie A champions Juventus.

The best we can hope for this season with Sanchez is that he performs strongly and convinces Inter to make their deal a permanent one. Another bad season for the Chilean will only make it more difficult for United to sell next summer.

And if he wanted to be at United, Solskjaer would not have sent him on loan knowing he was running short on options up front.