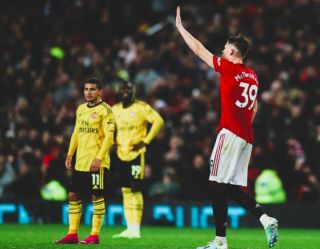 Scott McTominay has given Manchester United the lead against Arsenal on a sodden night at Old Trafford.

There was little to split the two sides in the first-half, but McTominay’s strike from 20 yards out has given the Reds a crucial edge going into the second period.

There has been a distinct lack of quality in the game, between two sides seemingly lacking in confidence, albeit in torrential rain in Manchester.

NEXT:Confirmed: Why Aaron Wan-Bissaka is not in Man Utd squad to face Arsenal

Ole Gunnar Solskjaer’s side now need to grind out an important win that would take them to sixth place in the league.

Another goal is needed to consolidate the lead for the Reds, as Unai Emery’s men look as dangerous as ever on the counter attack with Nicolas Pepe and Pierre-Emerik Aubameyang.

See United fans’ reaction to McTominay’s goal which has proved to be the difference so far:

Scott McTominay with the technique. One touch, bang. pic.twitter.com/0UZNf53t0n

It took 45 minutes for a moment of quality but Scott McTominay delivers for Manchester United! 🎯

Mctominay is developing into a special player. What a goal.

2/3 of Scott McTominay’s Premier League goals have come from outside the box.

Fantastic goal from Scott McTominay. Dan James is Manchester United’s best forward – so dangerous with the ball at his feet.

That is absolutely superb from McTominay, glorious goal from a player who has grown in to the shirt and becoming a vital player for Utd.