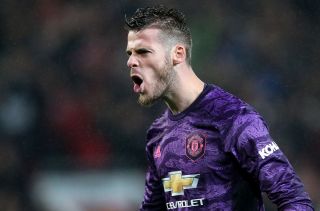 Arsenal’s equaliser would have been incorrectly disallowed if VAR wasn’t in operation at Old Trafford on Monday night.

David de Gea was asked after the match if the linesman’s flag distracted the United defenders in the lead up to Pierre-Emerick Aubameyang’s goal.

Speaking to Sky Sports after the match, De Gea has been quoted by the Manchester Evening News: “Well, it was a big mistake for us. We gave away an important goal. The game was well balanced. They had a few chances, we had chances.

“Of course if the linesman keep the flag down and we also know there is VAR behind it’s a goal for them. We need to learn from that mistake.

“We had good chances, of course they had too, but the better ones I think were for us. It is time to look forward and try to win every game.

“This is Manchester United so we have to win these games. The lads have to react and play better than they are doing. We are a team but we have to improve. We are looking forward to the next game and we will try to win.”

You don’t always hear from De Gea after the games, so tonight made for pleasant listening even if we are a bit pissed off about the result.

With his new contract comes fresh responsibilities. De Gea must start leading by example now that he has no distractions in the background.

The players haven’t been good enough this season and they need to hear that. Not just from fans and pundits alike, but team-mates too. There’s no point being extra nice to one another when there’s a real need for improvement.

Next up for United is an away trip to Newcastle.

Solskjaer needs his players to put a winning run of league games together or risk missing out on a Champions League spot come May.

After Newcastle we face Liverpool…