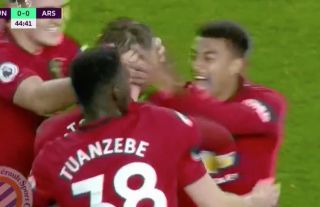 Scott McTominay scored the opener against Arsenal on the brink of half-time.

The first half has been a dull affair but it’s Manchester United who go in at half-time a goal ahead.

And it was McTominay, a player trusted with a key role this season, who we can thank for taking the lead.

READ MORE: Confirmed: Why Aaron Wan-Bissaka is not in Man Utd squad to face Arsenal

The Scotland international receives the ball at the end of the box before putting it past Bernd Leno and into the roof of the net.

It took 45 minutes for a moment of quality but Scott McTominay delivers for Manchester United! 🎯

United took their chance after the game opened up 10 or so minutes before the interval.

Now the half-time team talk will take a different tone as Solskjaer’s men are in front.