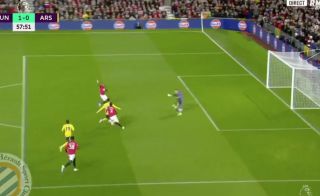 Arsenal have equalised in their Premier League tie against Manchester United at Old Trafford.

Pierre-Emerick Aubameyang is responsible for bringing the Gooners back into the game, but the Gabonese forward required VAR for the goal to stand.

Moreover, it was Axel Tuanzebe who sloppily gave the ball away in his own half.

READ MORE: ‘What a strike’: These Man Utd fans react to McTominay’s stunning opener against Arsenal

We can’t complain and the goal deservedly stands. It just means United have a lot more work to do in order to win the game and take three points.

Aubameyang took the goal well as he lofted the ball over David de Gea.

Aubameyang has the ball in the net but the linesman puts his flag up – VAR checks the decision and Maguire was playing the striker onside so the goal stands! ⚽