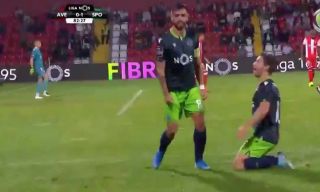 While The Express claims Manchester United will not be moving for Fernandes when the transfer window reopens in January, the Red Devils are will continue to be linked with a move to Old Trafford until they sign another midfielder.

The Portugal international was heavily linked with joining Ole Gunnar Solskjaer’s side in the summer but a deal never materialised. A report from ESPN’s Rob Dawson recently claimed that United dropped their pursuit of the playmaker because they felt he loses possession too much, proving to be the wrong candidate to strengthen the team.

In the time since, Real Madrid have emerged as potential suitors as Zinedine Zidane looks to give his side a makeover.

The Portuguese star has been in fine form for Sporting once again at the start of the 2019-20 campaign, contributing four goals and three assists in seven appearances.

He scored his fourth goal of the season in a Premeira Liga clash at Aves this evening, slotting home his penalty kick with less than 10 minutes left on the clock.

Check out Fernandes’ penalty which game Sporting a 1-0 win (footage from VSSPORTS):