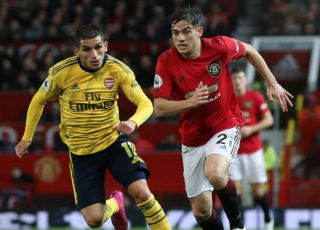 VAR came to Arsenal’s rescue as the big game at Old Trafford finished 1-1.

Pierre-Emerick Aubameyang’s equaliser was allowed to stand after VAR overruled an incorrect offside call by referee Kevin Friend, who didn’t have the greatest of games in terms of officiating.

The game only sparked into life after Scott McTominay opened on the brink of half-time.

But the Gooners emerged the stronger side after the break and the equaliser came courtesy of an error from Axel Tuanzebe, while Harry Maguire kept Aubameyang onside.

Ole Gunnar Solskjaer’s side were sloppy throughout but at full-time it feels like two points dropped for the Red Devils, who need to get a run of wins together in the league with a trip to Newcastle up next on Sunday.

This is the first time United gave won fewer than 10 points in their opening 7 games in the Premier League era, as per Sky Sports Statto.

Roy Keane gave his thoughts to Sky Sports, as quoted by the Manchester Evening News: “In the second half I thought it was shocking — United lacked a bit of belief to finish it off.

“The game was there for the taking for United, they will be kicking themselves. I’m not sure what Ole Gunnar Solskjaer would take from it, not too many positives.”

The Stretford Enders chanted Solskjaer’s name as he approached the tunnel at the end and there were boos for the referee too.

Daniel James showed a number of memorable moments as he made life difficult for Chambers early on, with the Arsenal defender booked 10 minutes into the game. The Wales winger kept working hard but couldn’t grab the winning goal we all wanted.

The Marcus Rashford recall did not pay off and neither did the decision to bring Mason Greenwood on towards the end.

Solskjaer will feel his side didn’t trouble Arsenal’s defence or goalkeeper anywhere near enough.

McTominay had a chance to double his tally in the second-half but the Scotland international skied a free header with the goal at his mercy.

Rashford had a close range free-kick denied by Leno as Arsenal hung on for the point.