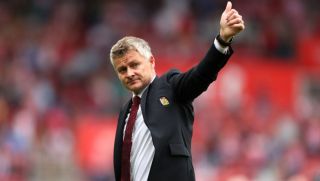 Manchester United’s lack of an experienced centre-forward this season has been quite evident in their goalscoring.

You would think with Ole Gunnar Solskjaer as manager, a former striker at the club, his coaching would be built around dealing with attacking players and getting the most out of them but United are really struggling in front of goal.

The Red Devils have netted just eight goals in six Premier League games this season. All the other teams in the current top-six have scored more.

But Solskjaer has stated that the next time United recruit, they will be looking to sign a forward to add some creativity and goals.

“Of course, we let Alexis and Romelu go, you don’t have to be a rocket scientist to see that it’s forward that next time we’re going to recruit. We’re looking for some creativity and goals,” the boss said, as quoted by the Telegraph.

“And there’s no point getting players in that you’re not 100 per cent sure about. When you get players in, you need the right ones that are going to stay here for a longer period and that’s the long-term thinking we have to show. I cannot think, ‘I need a player because this is my reputation.’ No, it’s the club.”

Most of Rashford’s career to date has seen the England international swapping between the striker and left-wing role, whereas Martial has usually be played out wide on the left. It’s still early days for 17-year-old Greenwood but the signs are very positive.

Solskjaer will be without Rashford and possibly Martial for tonight’s Premier League encounter against Arsenal which would spell a huge night for Greenwood to impress.