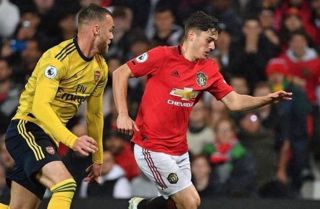 Manchester United and Arsenal played out a Premier League tie that was full of endeavour but low on quality. Scott McTominay put Ole Gunnar Solskjaer’s side ahead with his first Old Trafford goal shortly before half-time, only for Pierre-Emerick Aubameyang to score a VAR-assisted equaliser.

In truth, neither side looked like winning it and a draw was ultimately a fair result. Here are our player ratings

Made a brilliant double save from Buyako Saka and then Matteo Guendouzi in the moments before the United goal. In difficult conditions, his handling was good and his kicking generally strong bar one or two moments. Little he could have done about the equaliser.

Clumsy and suspect, his crossing was poor and although to his credit he tried to get forward, there is just a lack of quality. He was booked and struggled to contain the Gunners impressive three-pronged attack. He looked unsettled by Arsenal’s energy and pace.

Did little wrong but I’d like to see him bursting forward more. Tried to play out, got caught under the ball once or twice but you feel there is more to come from the world’s most expensive defender. Played Aubameyang onside.

An improvement on recent form, but he was caught napping at the back for the equaliser and his passing was off. Poor on the ball but generally quite steady.

I want to rate him higher as I think there’s a brilliant young player in this lad. A surprise selection at the back, he acquitted himself magnificently in the first half. He came under pressure after the break and lost the ball too easily for the goal. Nevertheless, a bright future beckons.

Got about Arsenal and added steel to a game low on quality. His superb finish for the goal was a moment not in keeping with the rest of the tie. Should have scored a second, guilty of a poor miss from a free header. Tried his best to drive a young United side forward.

Poor. Strolled around midfield, careless in possession and went missing when United needed him. Was he fit? Regardless, he should be doing more although to be fair the conditions were tricky.

He was involved in the move that led to the goal but that was about it. He tested Bernd Leno but like so many in Red he treated the ball like he was allergic to it at times.

His best work again came off the ball but he is lacking confidence. Poor decision making and often ran down blind alleys. His running drew a booking from newly appointed Arsenal captain Granit Xhaka.

A constant menace brimming with intent down the left. Started out wide but moved through the middle and the best player on the pitch by a considerable distance. He started the counter-attack and his lung busting run kept things move to tee up McTominay. A wonderful young talent and the only bright spot

Almost scored a rare set piece goal at the death but again lacking in confidence. Miscontrolled with the goal at his mercy, fluffed a good chance and always seemed to arrive either too early or too late. Not at it again but in mitigation it was his first game back.

Erratic, lightweight and offered little. Not up to it

Had a few glimpses and his movement was good. Didn’t get a chance to score but did little wrong in his brief cameo the day before his 18th birthday.