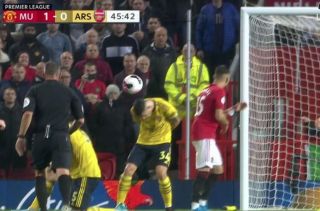 Arsenal midfielder is being slated for his ‘contribution’ to Scott McTominay’s opening goal against the Gooners at Old Trafford.

Manchester United currently lead 1-0 in what has been a heated affair between two pretty average teams.

The first-half didn’t contain much excitement apart from the last 10 minutes during which the Scotland international scored.

But Twitter caught a glimpse of Granit Xhaka’s body language prior to McTominay’s shot and it looks like he’d rather be somewhere else than face the Scot’s effort on goal.

See the picture below:

Few days ago, Granit Xhaka was named as the new Arsenal captain. Tonight he ducked under the ball and let McTominay score for Man United.

A disgrace to the armband. pic.twitter.com/YxvaiX0iEd

I grew up on Viera bossing midfield with vicks smeared on his shirt. Now I’m watching Xhaka on a 4K TV duck shots

Heres the Xhaka we all moan about…

1. Xhaka fouling.
2. Xhaka wandering about in the box.
3. Xhaka ducking under a shot.

Hopefully he ducks again the next time McTominay is within range.