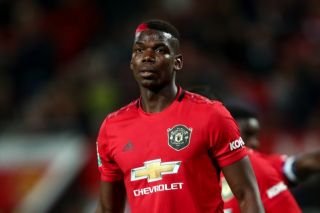 It’s about time we saw some leadership from Paul Pogba at Manchester United.

The Frenchman, whether you like it or not, is one of the main men in the dressing room. You can imagine he has a huge influence on most if not all of his team-mates.

As per a report in The Sun, Pogba is showering exactly the signs we need by issuing a heartfelt call to fellow United players ahead of tonight’s Premier League clash against Arsenal.

There is a slight problem though, as we might not see Pogba put his alleged words of encouragement put to work, with the France international a huge doubt for the game.

But the story claims Pogba has been working at United’s Carrington training ground alongside manager Ole Gunnar Solskjaer to prepare the team for their next fixture — without knowing whether he will be fit in time for kick-off.

It is also suggested that Pogba organised a team bonding last week to urge all of the players to stick together after a difficult start to the season.

An Old Trafford source told The Sun: “Paul got all the players together and has been speaking to them about sticking together.

“He has been in good spirits of late and is still pulling for Ole. He initiated a sort of rallying call to the boys.

“He knows he has a lot of responsibility and trying to inspire the younger guys around him.

“The backroom staff are impressed and been appreciated while he has been out injured.”

We haven’t seen the standard of performance that is expected of Pogba thus far this season. He needs to get back from injury and start to lead this team on the pitch.

It’s great to hear Solskjaer has Pogba’s backing and that the midfielder is trying to get everyone else in the dressing room to realise that, but if results don’t pick up some players will become fed up and that’s where trouble can brew.

Hopefully not and Pogba goes on to have a strong season as Solskjaer’s men clinch fourth spot and Champions League football.