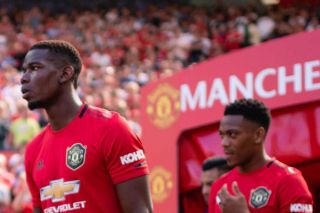 In years gone by this game was used to define Champions and if we go back further it was one of the jewels in the English game producing infamous moments and matches.

Now with the gradual decline of both clubs this fixture seemingly has become less about what goes on off the pitch but more about the likes, clicks and YouTube content that some fans of the clubs produce.

This fixture has gone from the Busby Babes winning at Highbury 5-4 mere days before the Munich Air Disaster through to losing the 79 FA Cup Final after coming from 2-0 down to only lose 3-2, a match my Dad is still upset about to this day.

Fast forward to the infamous brawl at Old Trafford and almost a full 22 man brawl erupted ending with both teams being docked points, then enter Arsene Wenger and the start of the best rivalry in decades.

Ferguson vs Wenger, Vieira vs Keane, Wright vs Schmeichel the battles in the late 90/early 00’s were legendary as two of the best teams this country has produced would go toe to toe fighting for Cups and Leagues galore. Now both managers have retired, and the clubs have faded into the background and try to recoup their past glories.

New managers are in place and both seem to be on borrowed time if you believe the rumours, but the rivalry on the pitch has seemingly gone away however the rise of Football Twitter and Banter has given birth to some twisted offspring. Fan TV started out as a good idea to give fans a platform to air their views on the match alas just like a good horror film something went drastically wrong.

For years Arsenal’s decline was the springboard for Arsenal Fan TV now known as AFTV after the club got involved to force them to change their name. For years the results got worse and the outrage and frustrations grew suddenly regular match going fans became pseudo celebrities amidst the rantings. Wenger OUT became a common occurrence on the channel and the longer he stayed the more the channel grew like a parasite feeding off its host.

Suddenly they became a problem for Arsenal fans as their views were suddenly going viral and as the popularity with opposing fans myself included would be to wait for a bad result then sit and watch the meltdowns commences clashes within the fanbases became inevitable.

Scenes of fans arguing with the AFTV crew outside the ground were doing the rounds on social media, then the became legitimate gaining invites to over time become the unofficial talking heads for football media. Where there is success you can bet your bottom dollar there will be imitators and now United’s decline has brought our worst fears to light.

AFTV popularity has spawned off into a TV show designed for football fans and a highly successful media career for its regulars and now United has its own imitators. I don’t know if many are familiar with a Remora fish, but United’s fan channels have become that, swimming in the slipstream of the bigger fish.

Suddenly cameras are commonplace outside United matches to capture the frustrations of fans and now we have our own versions of DT, Troopz and the many more colourful character that make up AFTV.

Now angry fan rants are a common occurrence and the content produced is going viral which is good for growth of these individuals but not for the majority of the clubs fan base, ranging from regulars demanding the current manager has to go to a man in his bedroom in front of a green screen watching the game live. A footballing Gogglebox if you will but this works for TV it doesn’t for sport, a man who seemingly has modelled himself on Alan Partridge but forgetting that Partridge’s awkward exchanges worked in context of his real-life interactions not sat in a room watching a screen.

Clips have gone viral and now United have their own roster of fans to come and create content for the channel, now they have been appearing on numerous platforms including BBC, Sky Sports to name a few so they now are legitimate in the eyes of Football Media but as the football clubs decline these channels continue to grow as rival fans tune in to see the meltdowns.

Now the build-up for the game on Monday night has built with all these football influencers of each club collaborating to create lots of content and after watching one particular video I felt that it was impossible to bleed from the eyes and ears at the same time where the video descending into a shouting match between the two United Presenters.

Now it seems United’s fan channels have become contenders for AFTV’s banter crown and if they win this, they could represent the Premier League in the equivalent of the Champions League and then next stop the World Championships.

Also, it seems these channels have their own football teams and are filming these like a full series kind of like Renford Rejects was for me growing up in the 90’s except that had better footballers and more realistic and likeable characters.

I feel we missed the rise of these Football Influencers and some of the cringeworthy content they are producing, and we may have needed our own version of Greta Thunberg to warn us and make us sit up and take notice.

In future years we may be asked by the next generation what did you do during the great Football Banter Wars? To which we will reply we just ignored them as best we could but by the time it was a problem, we were too late.

United used to be a club winning on and off the pitch with the best away support in the country and that is still the case for me, but viral clips and tweets are providing ammunition for us to be a laughing stock regardless of results on the pitch.

After last week against Rochdale a prominent member of the United fan channels proclaimed that Tahith Chong a young 17-year-old having only played a handful of games isn’t good enough because he apparently could tell if a player is good or not for United after just a few games in the way he his body shape is when he receives the ball. I mean the confidence of this man who seems to really commit to the character he is playing in a way that Daniel Day-Lewis or Sacha Baron Cohen seemingly just can’t is mind boggling.

I think in the near future the planet might not have long left (Climate Change, Nuclear War/Trump)  but after the football and society itself crumbles post Brexit the “Football Banter” may still exist in some Mad Max style Thunderdome where to paraphrase the film Two teams enter and no-one achieves.

Sadly, this fixture will be used to humiliate the loser in gif and tweets and in this scenario we all lose. The irony of these fans’ slagging off the club they supposedly love and hammering the owners for sucking the life out of the club whilst always being seen in the latest kit is a level of irony we have not seen before.

Fan content was a great idea until the realisation that money could be made, like a scientist in a film distraught that the work they were doing for greater good was hijacked for evil purposes. Both clubs do have great fans who write about their clubs Arseblog for Arsenal where Red News and United We Stand are great fanzines and podcasts with great fan opinion with fans talking about the club they adore without trying to chase money or clout. There are way too many to name on each side but sadly controversy gets view just ask Piers Morgan.

So while the rest of us just accept it’s a game of football that will be over after Monday night it seems the hunt for England’s biggest Banter Club will be between these two and will continue as long as the money keeps rolling in. For these guys a win means the team you have been hammering each week is amazing and the manager is steering your club in the right direction but lose and the natives will be lighting the torches and getting out their pitchforks.

These channels have lots of followers but just because something is popular doesn’t mean it is good for example the music of Coldplay (there are other examples I just really dislike Coldplay) and these accounts are slowly sticking the knife into Solskjaer and his tactical nous as because their own channels football team wins they suddenly think they are Rinus Michels inventing Total Football.

This game has lost some of its allure over the years with the two teams not doing so well but United’s rise as a banter club following the AFTV blueprint is not a welcome sight, Fancams, Vlogging are new things to football but are as unwelcome as Pineapple on Pizza for me sadly though it looks like they are here to stay and will be the stick used to reinforce our downfall as a fanbase a truly sad sign of the times.