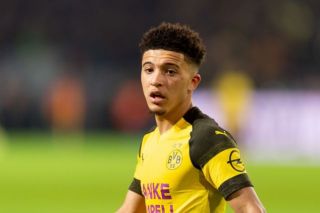 Ears on the ground as comments made by Borussia Dortmund sporting director Michael Zorc regarding the transfer situation of Jadon Sancho hit the press.

The exciting young England international has made a huge impression during his time with Dortmund, whom he joined from Manchester City as a youngster, and it’s only a matter of time before a bigger club comes in and seals his signature.

Sancho made the most of his opportunities at Dortmund and may now look to make that move. A return to England could see him become a regular under Gareth Southgate for England and possibly push Manchester United striker Marcus Rashford out of the line-up.

Rashford is likely to contend with Sancho for that spot on the flank as Harry Kane and Raheem Sterling are current certs to start at the European Championships granted the Three Lions qualify, which they will.

READ MORE: Solskjaer: Man Utd will target forwards the next time they recruit

According to the Mirror, United are still monitoring the 19-year-old after missing out on striking a deal in the summer, and there’s no doubting that we could do with an attacking player of Sancho’s quality.

The Red Devils have received a boost in their pursuit of Sancho with Dortmund seemingly resigned to losing another star player.

Zorc told Kicker, as translated by the Mirror, that he doesn’t see the teenage sensation at Dortmund in five years’ time.

“No decision has been made,” Zorc said. “But you don’t have to be a prophet to know he won’t play here for another five years.”

The next transfer for Sancho is a big one and he will hope it takes him a step closer to winning the Ballon d’Or as Cristiano Ronaldo and Lionel Messi’s domination of the award can’t go on forever.

He will also need to be careful after seeing Ousmane Dembele flop to date at Barcelona. The French winger was a similar talent at Dortmund before being snapped up by the La Liga champions.

Dortmund sold another young attacking prospect in January when USA international Christian Pulisic decided to leave for Chelsea. The American has yet to set the Premier League alight since the beginning of the season.