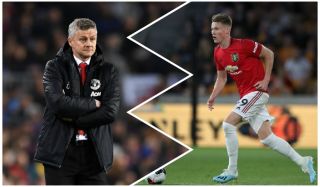 Scott McTominay has sent a clear message to Manchester United over the Ole Gunnar Solskjaer situation.

While not addressing the Glazer family or Ed Woodward directly, the United midfielder has sent a strong backing to manager Solskjaer amid the team’s poor form since the season began.

The Norwegian boss started his reign brightly when he arrived as caretaker manager in December, but the results have gone dramatically downhill since he landed the job permanently.

It remains to be seen if Solskjaer has the managerial credentials to make his job at United a successful one, but McTominay believes he is the right man to lead the team.

READ MORE: How much Man Utd would have to pay to sign West Ham midfielder Declan Rice

McTominay has been partnered mostly by Paul Pogba in midfield this season, but the positive signs from pre-season haven’t followed through into competitive games, and Solskjaer may need to adjust things in the coming weeks.

In an interview with the Mirror, the Scotland international expressed his views on managers not being given enough time in the modern game and that clubs should look to take the long-term approach.

“You have to have that continuity at any club,” he said.

“In this day and age, clubs are just willing to sack a manager, without really thinking about the consequences for how that team is going to go forward in the next five or six years.

“Ole definitely has a plan for the short-term and long-term, and when you’ve got a guy like that, it’s important you stick by him.”

This is an encourage message from one of Solskjaer’s men, unlike the sort of bickering we’ve heard from Nemanja Matic recently.

McTominay has become a regular in the team this season but he must feel like that particular unit on the pitch could be giving the manager more backing in games instead of being overrun by lesser opposition most weeks.