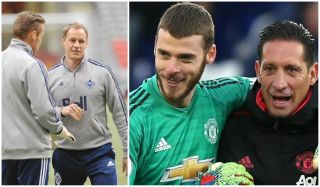 The Englishman started his coaching career as a Head of Conditioning under Aidy Boothroyd at Watford in 2005, but his latest job was an assistant head coach to Carl Robinson at Vancouver White Caps.

Pert worked in the MLS for four years before his sacking in October 2018.

Aged 41, Pert holds the Uefa Pro Licence and has a Masters degree in sports science.

He took it upon himself to visit current Leeds United manager Marcelo Bielsa to learn some tips from the iconic coach who is famous for his influence on Pep Guardiola and Mauricio Pochettino.

“We spent all day talking about football,” he said, as quoted by the Irish Mirror. “Well, I wouldn’t say I did much talking. I asked questions and he did the talking, which is the right thing to do. He’s one of the top coaches in the world and his passion for the game is incredible.”

Pert also enjoyed a short spell under Brendan Rodgers at Celtic, but now his job will be to work closely with David de Gea.

It’s a surprise to hear Alvarez won’t be at the club anymore because of his good relationship with United’s no.1. He wasn’t just De Gea’s coach but they were close friends too.

The Spanish goalkeeping coach informed United staff he was leaving last week and said his farewells.

Pert must now find a way to get De Gea back to his best.