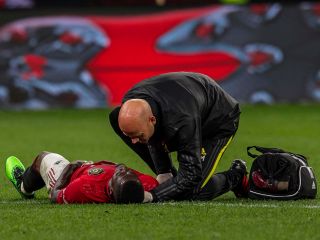 Eric Bailly has been missing all season after suffering a knee injury during a pre-season game against Tottenham.

A report from The Sun now suggests that the Manchester United medical staff are concerned with the defender’s slow recovery.

This means Ole Gunnar Solskjaer could be without the Ivory Coast international until the New Year.

Bailly underwent surgery in early August and club doctors were said to have been optimistic that he’d make a quick recovery but that no longer seems to be the case.

While it would be beneficial to Solskjaer to have Bailly fit and available to play, the United boss signed Harry Maguire in the summer with the view to partner the England international alongside Victor Lindelof.

That said, United still look vulnerable at the back. It will take Maguire and Lindelof time to develop an understanding, and it doesn’t look like Solskjaer is about to switch it up anytime soon, even with third choice centre-back Axel Tuanzebe performing well in recent weeks.

Bailly hasn’t really delivered since his 2016 arrival from La Liga side Villarreal.

The Ivorian started life at Old Trafford strongly but missed out on the Europa League final in 2017 through injury and never fully recovered his form.