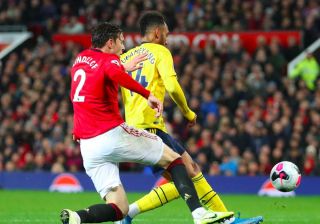 Manchester United failed to capitalise on their half-time lead by being held at home to Unai Emery’s Arsenal.

The Reds opened the scoring on the stroke of half-time with an excellent finish by the impressive Scott McTominay.

It was a scrappy game low in quality, but United deservedly had the lead at half-time.

But Ole Gunnar Solskjaer’s men did not do enough in the second half despite the best efforts of Daniel James who looked consistently dangerous on the left-flank.

There was several chances in the game, but United lacked the cutting edge needed to secure all three points.

The draw leaves United 10th in the league table after seven games, a huge 12 points off title chasers Liverpool at the top.

Solskjaer’s side face Newcastle next in the league at St James’ Park on Sunday, and we hope the much missed Anthony Martial can return from injury.

See some fan reaction to yet another disappointing result for the Reds below:

I am overall a big fan of Paul Pogba, but he was anonymous for Manchester United tonight #MUFC

I hate this team of players tbh.

I hate the managers tactics

I hate the managers team selection

I hate the way he always defends the team even though they are shit.

I hate the board.

I hate the owners.

Please someone tell me something positive about this team ffs

United have made one big error and it's cost them two points. That's the problem when you hardly ever score more than one goal a game. James, McTominay and Tuanzebe (even with the mistake) all positives.

Full Time.
A point at home isn't a good result. Nor was it a good performance. Inconsistency will be the end for many of these players, possibly the manager.

Squad is too thin and arguably too weak to compete. Long season ahead…

Another fucking irritating night out at the football. Thought we actually played alright. The issue is yet again we dropped points to a crap side. Arsenal did fuck all and still got a point away from home.

Not good enough. Yet another match I’ve watched where I don’t see any tactics, ambition or any sense of plan. It’s all played off the cuff and it’s simply not good enough. 2 wins in 12 is pathetic for this club.