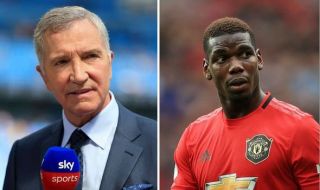 Graeme Souness had his say on Manchester United’s midfield in a recent column.

The former Liverpool player thinks United’s midfield is the problem with Paul Pogba failing to set the tone.

The Scottish football pundit has a reputation for his analysis on Pogba. It’s almost become a joke on social media, with memes and threads coming as a result of his various rants about the French midfielder.

Souness doesn’t rate Pogba. He never has and never will.

His agenda against Pogba, if you must call it that, is aided by the France international’s bad form for United. Souness rarely passes up the opportunity to take aim at the former Juventus man.

“United’s midfield are too east to play against,” Souness wrote in his Sunday Times column.

“Nemanja Matic, Scott McTominay and co should have been sprinting out to put West Ham’s midfielders under pressure.

“If you’re a defender with that in front of you and the opposition have time to pick a pass, you’re going to be in trouble and that’s where United find themselves.

“When I played in midfield, I had one thought: ‘I’m going to stop the guy I’m playing against today, then develop my own game from there.’

“In contrast, Pogba’s first thought is to show everybody how clever and cute he can be.

“If that’s the example your main man in midfield is setting, you’re too easy to play against, and until they fix it, United’s back five will be fire-fighting.

“They can spend massively on [Harry] Maguire, give Victor Lindelof a new five-year deal, [David] de Gea four more lucrative years and sign [Aaron] Wan-Bissaka and it will be all money down the drain.”

None of this is constructive criticism of Pogba and that’s partly because Souness couldn’t help himself but an irrelevant dig to back up what he had to say.

What does showing people how ‘cute’ you can be have to do with football or winning football matches?

Pogba can dress how he likes, colour his hair purple for all I care, but his performances are below par and he needs to do something about that.

Souness might not think so, but Pogba can live a flashy lifestyle and be a great footballer at the same time. But he needs to find how to juggle both!