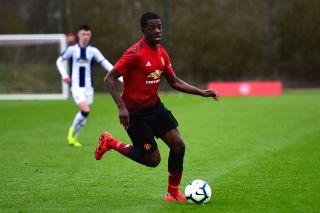 West Ham are in reportedly talks over the signing of 16-year-old striker Mipo Odubeko — who scored 35 goals for Manchester United’s academy last season.

That’s according to 90 Min, who ran their story on the Republic of Ireland U-17 international on Saturday, noting how he rejected ah offer from the Red Devils in July and left Old Trafford following the expiration of his contract.

United have apparently continued their attempts to convince the player to sign but without success. Perhaps the player and his representatives believe his development will be best served away from Manchester, but that’s hardly accurate when you see the amount of youngsters Ole Gunnar Solskjaer has brought into the first team since becoming manager earlier this year.

Being a free agent at 17, any club signing him would need to pay compensation which could be set by a tribunal unless the two clubs can agree on a figure between them.

Meanwhile, United have recently been linked with a move for 15-year-old West Ham defender Jamal Baptiste, who has played for the U-23s this season. He’s used to playing well above his age and made 14 appearances for the U-18s last season, as well as representing England at U-16 level.

If there’s no way to convince Odubeko to re-sign at United, and he fancies joining the Hammers, perhaps we could wiggle some deal in that could see Baptiste go the other way?

It’s a shame that Odubeko doesn’t see a future at Old Trafford. Not many kids his age would turn down such an opportunity.