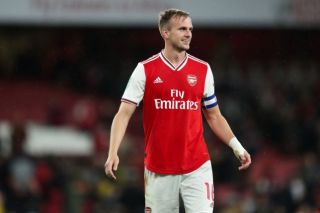 Arsenal manager Unai Emery is not sure about the availability of centre-back Rob Holding for tomorrow’s Premier League encounter with Manchester United.

The 24-year-old was out of action for several months after injured himself in a match against the Red Devils, but made his return to the first team during the week against Nottingham Forest in the Carabao Cup.

Holding scored Arsenal’s second goal in the 5-0 win over their Championship opponents.

READ MORE: Opinion: You may want Ole out, but you don’t want Roy Keane in

Emery stresses he wants players like Holding in the dressing room but was unsure of the defender’s availability for the big game at Old Trafford.

As quoted by The Metro, the Arsenal boss said: “When I saw him on Tuesday I thought ‘wow’! He’s coming back – Rob Holding! I can not be certain he will start on Monday but I want him there for his spirit, his behaviour, his commitment. He feels really Arsenal Football Club and I want players like him in the dressing room.”

Despite these comments suggesting Emery doesn’t know whether Holding will be ready for kick-off on Monday night, it sounds like the Frenchman will start his man in the heart of Arsenal’s defence.

Arsenal are poor at the back and need Holding to reach full match fitness as soon as possible. His return won’t turn the Gooners into defensive masters, as much as Emery would like that judging by his style of play, but he’s probably the best centre-back at the club.

Arsenal are eight in the Premier League but win over United would see them rise to third.