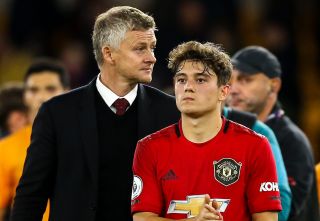 Ole Gunnar Solskjaer says that Daniel James’ arrival at Manchester United reminds him of his own time at the club.

Wales international James has hit the ground running at Old Trafford when it was initially thought that the former Swansea City winger would take time to settle and come to terms with playing in the top flight.

But the 21-year-old has quickly established himself as a key figure under the Norwegian manager.

James scored a late goal on his debut for United against Chelsea before adding to his tally in league matches versus Crystal Palace and Southampton.

Already his transfer fee of £15m, as per BBC Sport, looks an absolute bargain and you can see why Wales manager Ryan Giggs sung the young talent’s praise all summer.

Solskjaer himself signed for United for a bargain fee. A lot less than £15m though, but in today’s market you won’t find many star players for that at this level…

The Norwegian striker cost United £1.5m back in 1996, and when asked if it was possible to sign someone like that in the modern game, the United boss referenced the capture of James as evidence that it is.

“I think we’ve shown with Dan James,” he told Sky Sports. “The price we had to pay for him wasn’t massive, and he’s shown there is talent out there, if you scout them well enough and recruit the right personalities, you don’t have to pay over the odds.

“Of course. The money that’s involved in football now is different, but I’m delighted with the three we’ve signed. I think they’ve shown that we’re doing a good job.”

There’s no denying that the three new buys have done well, but our results on the pitch tarnish that.

We need to find a way to win games and quickly!