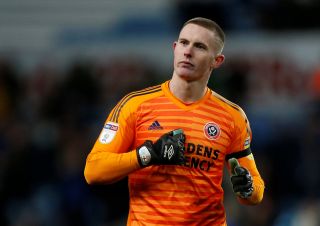 Manchester United are reportedly ready to sell goalkeeper Dean Henderson for £20m after David de Gea’s recent decision to commit his long-term future to the club with a new contract.

The 22-year-old now looks unlikely to ever become a regular in the first team at Old Trafford, despite looking a decent prospect whilst on loan at Sheffield United.

Henderson may have dropped a clanger at the weekend against Liverpool, a game which saw the Blades lose 1-0, but all keepers make mistakes. Even De Gea!

United should get a pretty good transfer fee from selling him in the summer since he was part of Sheffield United’s promotion-winning campaign last season and has played every Premier League game under Chris Wilder thus far.

According to The Sun, United have put a £20m asking price on Henderson’s head.

This is probably the right move for Henderson. At 22 and gaining Premier League experience, he probably won’t fancy returning to sit on the bench or worse, being third choice shot-stopper behind Sergio Romero.

Henderson probably saw the De Gea news and knew his days at Old Trafford would be numbered, but hopefully it works out for him at Bramall Lane this season.