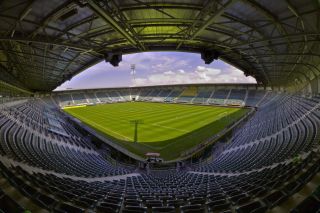 Ole Gunnar Solskjaer is already having to deal with a number of injuries and now Manchester United could face further injury woes as they will have to play on an artificial pitch when they face AZ Alkmaar away in the Europa League next week.

The game will take place 70 miles away from Alkmaar, at the Kyocera Stadium in The Hague.

This is because the roof at AZ Alkmaar’s home ground, the AFAS Stadium, collapsed last month. The Eredivisie side have had to play their home games elsewhere since then.

As reported by The Sunday Mirror, as cited by the Daily Mail, United will play on a plastic pitch which has been described as the worst in Holland!

ADO Den Haag play their home matches at the stadium and players have previously complained about hurting themselves on the surface, which doesn’t bode well for Solskjaer’s men.

Now Solskjaer needs to carefully think about his approach for the upcoming Europa League fixture. It probably wouldn’t be wise playing Pogba, who returned during the week against Rochdale but still ended up feeling a knock at full-time mean he’s not 100 per cent just yet.