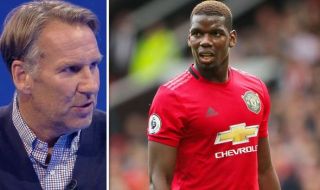 The Red Devils haven’t been convincing of late, sitting 11th in the Premier League and relying on penalties to knock Rochdale out of the Carabao Cup, and they will be hoping to get back to winning ways in the league over the Gooners.

Pogba made his comeback midweek and is now a doubt for the game against Unai Emery’s men, but that hasn’t stop Merson from being critical of Pogba and United.

Merson wrote the following in his column in the Daily Star: “United were so disappointing in the Carabao Cup game. All credit to Rochdale but they shouldn’t be coming off the pitch against Paul Pogba thinking: ‘How is he a World Cup winner?’

“I always remember playing the great AC Milan side of Franco Baresi and Paulo Maldini in the Super Cup. We thought we were a good team but they just outclassed us. They were another level.

“United should have left those Rochdale players remember how good they were for the next 25 years. But there’s no fear factor with United any more.

“They’ve had their day winning things. They’re just like everybody else now. They need to take their medicine for the next three years. They’ll be back. But they need to build slowly and wait for that day to come.”

Although Merson is having a pop at Pogba and United, I don’t disagree with a thing he’s saying here.

But coming at this with a realisation that we’re just not good any more doesn’t seem right. United fans should expect better.

When you see how much the club earns every year and compare that with the money spent on improving the team, it doesn’t really add up, and United definitely should have signed a midfielder and striker before the season began.