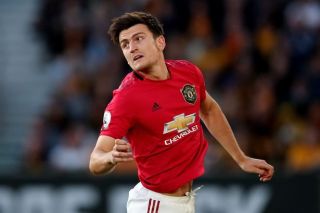 Harry Maguire aims to contribute to both ends of the pitch for Manchester United.

Maguire scored three goals for Leicester City last season and also netted for England in their World Cup quarter-final win over Sweden in 2018.

With his sheer power in the air, Maguire should definitely be expected to deliver in our box as well as our opponent’s penalty area.

READ MORE: Unai Emery not certain if Arsenal ace will be ready to start against Man Utd

The 26-year-old has yet to score for United since his summer move and was annoyed with himself last weekend after missing a good chance to score in the 2-0 defeat at West Ham.

“I see myself as a threat,” Maguire said in the club’s official match day programme, as per The Independent.

“I’ve had a couple of headers this year up to now and I’m sure to get on the end of many more crosses and create chances in the box. It’s something I take pride in as I work on it on the training pitch.

“I like to say I’ll chip in with some goals to help the team out in terms of getting some good results.”

All three of United’s new signings — Maguire, Daniel James and Aaron Wan-Bissaka — have settled in quickly, but results must improve if they’re all to receive warranted praise.

Maguire will be a positive addition to United’s defence, as will Wan-Bissaka, but it will take time for the England international to strike a solid partnership with Victor Lindelof.

They’re not playing alongside one another very long and we must accept that over the course of the season. This is very much a transition and patience is needed in such circumstances.

United host Arsenal in the Premier League on Monday night and our defence will need to be solid if we’ve any chance of winning the game and getting three points.