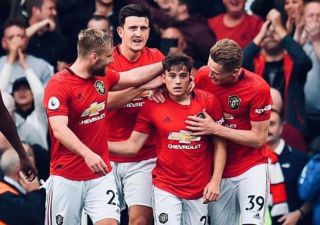 The squad compiled by United’s arch rivals is now incomparable to the one Ole Gunnar Solskjaer has to deal with at Old Trafford.

Jurgen Klopp’s side are painfully leaps and bound ahead of the Reds at the moment, and are leading a title charge ahead of Pep Guardiola’s Manchester City.

NEXT:Chris Smalling’s impressive stats as he earns Man of Match award for AS Roma

Although United still have to play their fixture tomorrow, falling 13 points behind Liverpool just six games into the season is a damning depiction of just how far we have fallen since the days of Sir Alex Ferguson.

“United need more quality to catch up to their rivals but that doesn’t mean they don’t have any at the club,” he told the Daily Mail.

“They would fit in with his philosophy very well.”

Whilst this is a fairly harsh assessment, it’s hard to make a case for many of Solskjaer’s players that would actually make into Liverpool’s first-team on current form.

David De Gea is almost always a certainty when it comes to picking a combined XI with United, but Alisson has had an astounding year, culminating in picking up the award this week for best Fifa Men’s goalkeeper.

There is also a case for the likes of Paul Pogba, who is far more talented than Liverpool’s central midfielders; but the question mark would be whether he has the consistency and energy levels to fit in their side.