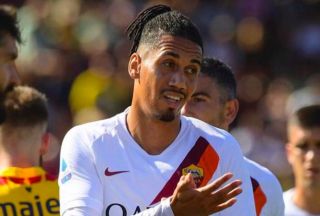 The centre-back had a disappointing debut against Atalanta losing 2-0, but bounced back with an impressive performance here.

Smalling started alongside young Italian defender Gianluca Mancini in central defence, and put in an assured an assertive performance, helping Roma move up to fifth in the Serie A table.

NEXT:Harry Maguire: I want to become a goalscoring threat for Man Utd

The move to Italy was a brave one for Smalling to make after over 300 appearances for United. Ole Gunnar Solskjaer could have rotated the defender in the cup competitions, but his ambitions mean’t he made the season-long loan switch to the Serie A giants.

Instead, Axel Tuanzebe has been promoted to third-choice centre-back at Old Trafford, and captained Solskjaer’s side against Rochdale in the Carabao Cup on Wednesday.

Smalling’s performance on Sunday was almost flawless, as evidenced by stats compiled by Statman Dave below: