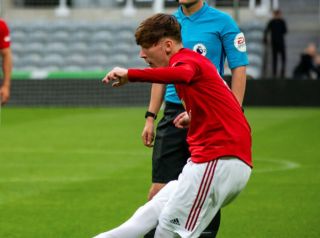 There will be more calls for James Garner to get a first team opportunity after his latest U23 performance.

Garner slotted the ball into the net nicely with a side-footed finish from 18-yards out.

He has five goals and two assists from six games with the U23s this season.

Many thought Garner would feature against Rochdale in the Carabao Cup but that didn’t happen, so we’re starting to wonder how close is he to getting minutes under Ole Gunnar Solskjaer.

The midfielder was an unused sub against FK Astana in the Europa League and he trains with the first team, so there’s every chance we’ll see him play soon.

United fans reacted to Garner’s display last night and there are a few are calling for Solskjaer to give him a chance.

James Garner man, what a player!

I think its better to play garner fred and Mctomnay in Mid 3 vs arsenal! But i know OGS will go with Passed it Matic! @carras16 @Mike_Phelan_1 #MUFC

Still don’t understand why Ole risked Pogba rather than give James Garner a shot, way to good for the u23 and would get into the first team atleast last 20mins…he’s a game changer and never scared of pressure… He’s been fantastic for the mufc u23s tonight vs Norwich

Surprised James Garner hasn’t been given minutes in the first team. U23s

James Garner…….kids gonna be a smasher

There’s a lot of excitement surrounding Garner. Let’s home he gets his time to shine soon.