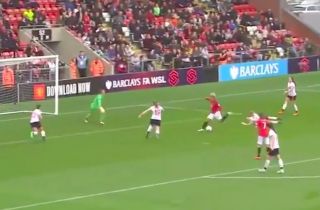 Manchester United secured their first victory in the Women’s Super League with a 2-0 win over rivals Liverpool.

United took the lead midway through the second half with a brilliant finish from Lauren James, before Katie Zelem but the game beyond doubt with a penalty in the final stages.

The game was played at Leigh Sports Village, home to United’s mens academy side, in front of just under 3,000 supporters.

Casey Stoney’s side move up to fifth in the league table with the win after losing their opening two matches.

17-year-old James’ provided the highlight of the match, and she is definitely one to watch out for in the coming years.

We expect James to eventually be called up to Phil Neville’s England squad after representing the Three Lions at age group level.

See her effort to open the scoring below: