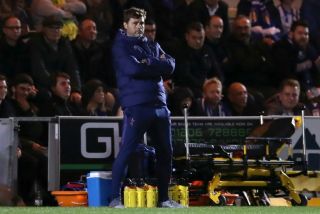 Tottenham boss Mauricio Pochettino has been long linked with the Manchester United job. Even before José Mourinho got the sack last December, the Argentine was said to have been a preferred choice at Old Trafford.

That changed after Ole Gunnar Solskjaer impressed as caretaker manager. United decided to end their pursuit of Pochettino and stick with the former striker, who looked to have successful unify the dressing room whilst getting players performing again.

Spurs have had a poor start to the new season and have already been knocked out of the Carabao Cup by League Two side Colchester United.

The Sun claims that Spurs players are unhappy with Pochettino and that some of them believe he wants the United job. It is suggested that “a growing number of Spurs stars believe Poch will go at the first opportunity, with Manchester United his preferred destination.”

Players are apparently angered by some comments made by Pochettino following this week’s humiliating Carabao Cup defeat.

Pochettino allegedly accused some players of having “different agendas” and it’s been suggested that he aimed that the likes of Manchester United target Christian Eriksen, who is constantly linked with a move away from White Heart Lane.

However, The Sun quote ‘a source close to a number of players’ as saying: “They feel Poch is the one with an agenda.

“They are not impressed with him at all and what he said has not helped at all.

“The players feel Christian was always being up front and honest about wanting to leave.

“Some of the players feel that Poch does not like it if he doesn’t get his own way.”

It’s early days for Solskjaer and he deserves our backing right now.