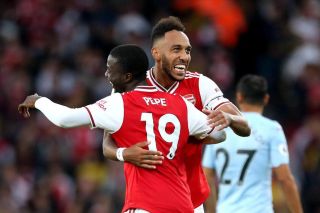 Ole Gunnar Solskjaer will be hoping his players can get their season on track with an away win over Arsenal on Monday night.

Manchester United had to rely on penalties to advance in their Carabao Cup third round tie against League One side Rochdale on Wednesday night.

In a far from convincing performance, which saw Solskajer without a number of players through injury, the Red Devils looked incapable of breaking their opponents down.

Arsenal won’t be anywhere near as defensive and their defence itself leaves a lot to be desired. (That said, it’s ridiculous to think we struggled so bad against a side 17th in League One.)

Like ourselves, the Gunners find themselves competing in the Europa League again. A world away from the days that will be remembered for the fierce battles involving Roy Keane, Patrick Vieira, Ruud van Nistelrooy and Martin Keown.

From the beginning of the season we knew Arsenal would be competing for 4th place in the Premier League, which goes to show how far these two clubs have fallen down the years. It used to be about coming first.

Arsenal are currently fourth in the league standings after starting the season with three wins, two draws and one defeat. United are three points off the Gunners in eight and already look to be slipping away from the race for Champions League football but there’s plenty of games left to play.

NEXT: Man Utd predicted XI vs Arsenal: Angel Gomes to start against Gooners

It’s early days and Solskjaer’s men have enough time to set the record straight, but a turn in form must happen soon for that to happen. A win over Arsenal on Monday night would be a step in the right direction.

Stretty News featured on the Highbury Squad podcast this week to preview Manchester United vs Arsenal. Listen below and send your scoreline predictions for the match on Twitter.

Unai Emery has his critics among Arsenal’s support but the club isn’t being run properly and their fans can vouch for that. We’re not too dissimilar with the Glazer family still running the ship. The American parasites are draining United dry with Ed Woodward the puppet on strings.

Hector Bellerin, Rob Holding and Kieran Tierney all made returns from injury on Tuesday, with the latter making his Arsenal debut. We should have signed the Scotland international, who was linked with United a few times during his time at Celtic.

United are awful at the moment and recent injuries only makes matters worse. We face an Arsenal side who themselves are very inconsistent but with the likes of Pierre-Emerick Aubameyang, Dani Ceballos and Nicolas Pepe in attack, they could cause us some discomfort.

Victor Lindelof and Harry Maguire will need to be at their best.