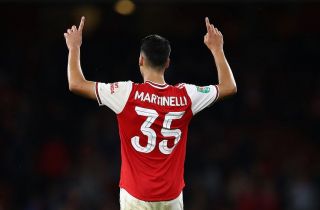 The Brazilian teenager starred on his first competitive Arsenal start during the week, scoring twice as Unai Emery’s side advanced in the Carabao Cup past Nottingham Forest.

Martinelli joined Arsenal from Brazilian side Ituano in a deal worth £6m, however, things could have been very different.

The Daily Star claims that United invited the forward over to Manchester to train on four occasions between 2015 and 2017. Martinelli even featured in an U18 game for the club.

A move was never completed though, suggesting that the Red Devils didn’t fancy the forward now trying to edge his way into the Arsenal line-up.

The question now is will Martinelli make United regret the decision not to sign him?

It’s too early to say, really. His performance during the week shows a striker with lots of promise so there might be a few people at Old Trafford thinking twice. Time will tell if he can stake his claim in the first team, and right now he’d have a better chance of starting games at United due to our lack of options in the striking department.