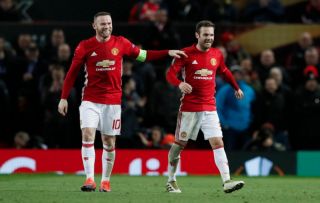 Juan Mata is currently one of the more senior players in the Manchester United dressing room nowadays, with our young players no doubt looking up to him to set an example.

The Spaniard is a true professional and the younger lads could certainly learn a thing or two from being around him. Angel Gomes should be looking to take bits from Mata’s game seen as they’re similar players.

But when Mata first signed for United, Wayne Rooney — who would become club captain — would perform a similar role when the likes of Nemanja Vidic and Rio Ferdinand were moving on.

READ MORE: Why Dimitar Berbatov is worried ahead of Man Utd clash against Arsenal

ManUtd.com have published an extract of Mata’s autobiography ‘Juan Mata: Suddenly A Footballer,’ and in this section he compares Rooney’s captaincy style to some of the other great leaders he’s shared a football pitch with…

“Wazza is the type to get everyone up for it and he would shout loudly in the dressing room before every game, half-time or even after if the performance was not up to standard.

“We could say that his way of leading was more vocal, more extrovert, bringing everyone together and even taking time to sit down with players individually, trying to help, making everyone feel comfortable.

“If Wazza did his bit to create that kind of atmosphere in his own way, I have to say that I’ve also encountered other players during my career with similar attributes or styles of leadership.

“I’ll give you the names: Sergio Ramos, Carles Puyol, John Terry. All of them natural-born leaders — vocal, passionate, intense. They had a key presence in the Spanish national team and Chelsea’s dressing room over many years. They were key to our success.”

It’s easy to forget that Mata was also part of Spain’s incredible success. They’re not quite performing at that standard anyone, nor does Juan get any call-ups, but his winning experience should also rub off on our younger players.

Mata’s certainly not one for being vocal.

Well, he doesn’t come across that way.

But he can spread his influence other ways and I’d imagine he’s a popular figure among the younger lads.

United could do with some vocal leaders nowadays but maybe Harry Maguire can do that job himself from the back?