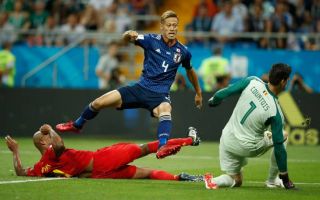 We’ve not heard about Honda for some time now, having previously starred for CSKA Moscow and AC Milan.

The Japanese attacking midfielder made his name in Russia, scoring 28 goals and providing 29 assists. That spell lead to a move to Serie A, where he scored 11 and assisted 14 in 92 appearances for the Rossoneri.

His career has nosedived since leaving Milan for Mexican club CF Pachuca before joining Australian side Melbourne Victor a year later.

Honda now finds himself without a club despite having a job as the general manager and coach of the Cambodia national team.

Still, he has urged Manchester United to sign him to fix our midfield woes.

He pleads: ‘I don’t need money but I need to play with great team and great team mate!’

Give me an offer. I don’t need money but I need to play with great team and great team mate! @ManUtd @ManUtd_JP

Things are bad at Old Trafford, but how bad must they get before manager Ole Gunnar Solskjaer considers a move for Honda, who wasn’t even kept on by an Australian club?

United are yet to respond to his tweet and we don’t think they will!