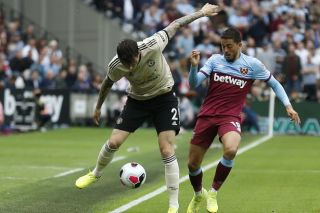 Victor Lindelof has shrugged off criticism from former Manchester United manager José Mourinho after his team’s 2-0 defeat to West Ham.

The Red Devils strengthened in defence in the summer with signings Harry Maguire and Aaron Wan-Bissaka, but Ole Gunnar Solskjaer’s side conceded two avoidable goals against the Hammers.

Mourinho believes that the Swede is weak in the air and can be bullied off the ball, which is not the sort of assessment a centre-back wants to hear, but it’s also strange too given the Portuguese manager is the one responsible for bringing him to Old Trafford.

Lindelof explains that playing for a big club such as United is bound to bring criticism but he is not affected by what people around him have to say.

“For me it has never been a problem, I’m a very easy guy,” the defender told Sky Sports.

“For me not has never been a problem, even when I play good there is someone criticising me for something. It’s part of the job, everyone is entitled to their own opinion.

“I’m just trying to do my thing and I don’t focus on those things. I didn’t even notice, or know about it, before you told me. That’s how I live my life and focus on my things.

“If you are playing for Manchester United [scrutiny] is part of it. If you do not perform you heart about it, it’s quite normal.

“I could see my future here so that’s why I signed a new contract — I’m really happy about that. We have a good thing going and I still want to win the big trophies with this club, that has been my goal since I signed.”

The Sweden international was United’s most improved player last term and now he’s trying to build a formidable partnership with Maguire.

That won’t happen over night but both players need to be at their best for Monday night’s Premier League clash with Arsenal at Old Trafford. The Gooners have a lot of firepower going forward.