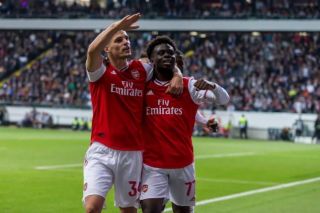 The 18-year-old winger took his opportunity starring for Arsenal in the Europa League as he scored and provided two assists against Eintracht Frankfurt.

He has the same amount of goals this season as £72m signing Nicolas Pepe who joined Arsenal from Lille in the summer. That may be a contributing factor behind the calls to see Saka given more game time.

READ MORE: Barcelona not interested in selling ace under consideration at Man Utd

For Arsenal, it’s an ideal time to come to OId Trafford. We usually fancy ourselves to bully the Gooners — home or away — but this United side seems incapable of doing that at the moment. We are miles off where we need to be.

The Red Devils had to rely on penalties to beat Rochdale in the third round of the Carabao Cup on Wednesday night.

Nicholas had his say on the upcoming game, as per Sky Sports.

He said: “I am laughing already because we have a tale of two bad defences. Man United have one of the best keepers in the world in David de Gea and the most expensive defender in the world in £80m Harry Maguire. They got picked apart against West Ham and were nowhere near to earning anything from the match. Arsenal have five captains supposedly! Let the games begin!

“Hector Bellerin played a little bit against Nottingham Forest. Ainsley Maitland-Niles is suspended and though Unai Emery has been cautious about him, I think Bellerin should play. Kieran Tierney should be in, but Rob Holding will miss out I think.

“Arsenal will play two protectors – to my amazement, Granit Xhaka will still be in, but I would go with Lucas Torreira and Matteo Guendouzi. I would be happy with Dani Ceballos and then Bukayo Saka, Nicolas Pepe and Pierre-Emerick Aubameyang. It is that easy and simple for Arsenal.

“On the flip side, who is fit for Manchester United? Marcus Rashford is out; is Anthony Martial ready? If Arsenal can play a more structured game on the counter-attack, I think they will come away with all three points.

“Man United will try to dominate the midfield with aggression, with Scott McTominay and Paul Pogba. Aubameyang and Pepe had chances against Liverpool at Anfield and if they get these chances against Man United I think they will take them. It will make life easier for Arsenal’s defence with Man United’s depleted frontline.”

Tierney and Bellerin are only back from injuries, so it would be a risk for Emery to start both players against United.

We need to ensure we target Xhaka if he starts and it seems most Arsenal fans I talk to don’t want him anywhere near the team.