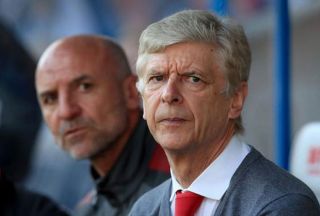 Manchester United are looking to get back to winning ways in the Premier League against Arsenal on Monday night.

The hosts sit fourth in the table, four places and three points ahead of United, and they will fancy their chances after seeing the Red Devils rely on penalties to beat Rochdale in the Carabao Cup during the week.

We spoke to Arsenal blogger Patrick McLaughlin from JustArsenal.com ahead of the match.

What are your thoughts on Unai Emery now he’s had a full season in charge?

The jury is still out, but a lot of fans are of the opinion that Emery tinkers a bit too much, and still seems to not know what his best team is yet, despite having a year to learn all about them. His team selections can be baffling at times and his substitutions often leave us flabbergasted!

Arsenal have a lot going for them up front but the defence is weak. How many signings are needed to go from challenging for top four to a title race?

I think that we have to see how all our defenders pan out that are returning from injury. Holding, Tierney and Bellerin could improve the team no end, and we can’t understand why Chambers is always left out despite playing some exellent games when given the chance. The only big thing that most fans agree on is that Xhaka has to be replaced as soon as possible.

When you think of Manchester United is there one moment that stands out? I personally miss the clashes between Roy Keane and Patrick Vieira.

The last time Arsenal won at Old Trafford was in 2006 when Adebayor stood in for Thiery Henry and scored the winner in the closing minutes. That was a sublime moment in our history, but the Fergie v Wenger battles over the years have always been fascinating for me.

If you could sign one current United player, who would it be and why?

Despite the squillions that have been invested by Man United, I still don’t think  that they have come anywhere close to the starstudded line ups of yesteryear, and if I had to choose it would be Rashford, although he would be unlikely to be more than a supersub at Arsenal.

What on earth happened with Aaron Ramsey? Top player, always looking to make things happen in the final third and he seemed happy at Arsenal…

Yes, Aaron was a Gooner through and through, but the fact is that he has spent half his career at Arsenal on the bench or in the treatment room. We do know he was/is a great player, but he is just a little too injury prone for my liking and was rarely available when we needed him. He was always be revered for his cup-winning goals though…

Arsene Wenger is out and about giving interviews, speeches and match analysis. Do you think the club missed a trick not giving him some director’s role because, let’s face it, he is a true football visionary even if results nosedived in his latter years at Arsenal?

I think Wenger feels hard done by, by the Board and the fans alike. He did wonders in the early days but his tactics and vision simply became outdated. I think fans would prefer him not to have gone upstairs as we could see him interfering with any new manager too much. But he remains our greatest manager of all time and is revered as sch.

Arsenal are not usually up to facing Man United at Old Trafford and I think we’ll be lucky to come away with a draw. United always up their game for this one and current form usually means nothing, but I can always hope for another Adebayor moment, especially with our best strike force on the field. A moment of brilliance could get us the points!