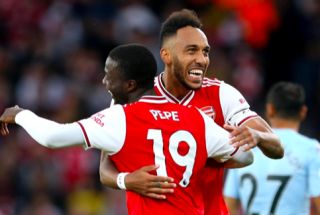 Dimitar Berbatov is concerned Manchester United’s defenders may not be able to handle the dangerous Arsenal attackers at Old Trafford on Monday night.

The Gunners are currently placed fourth in the table, and have won three consecutive games going into Monday’s clash.

United, meanwhile, have endured an awful start to the season and sit eighth in the league table.

Ole Gunnar Solskjaer’s side scraped through against Rochdale on Wednesday night and his squad is now threadbare going into the game against Unai Emery’s side.

The Reds are likely to be without both Marcus Rashford and Anthony Martial, but Luke Shaw could return after returning to full first-team training on Friday.

Former United striker Berbatov has previewed the game, and has highlighted the threat of Pierre-Emerick Aubameyang and Nicolas Pepe to watch out for.

“I am worried about the front players of Arsenal, especially Aubameyang – he is phenomenal,” Berbatov told Betfair, as quoted by the Metro.

“I like Pepe as well, he is so unorthodox, he’s really fast, he can go one-on-one and challenge defenders. ‘On this part of the pitch Arsenal are so dangerous, they can kill you with their speed so United need to be careful of that and don’t lose any space to them.”

Arsenal are favourites for many in this one, despite star striker Alex Lacazette being out through injury.

Unai Emery has far superior fire power up front to choose from than Solskjaer, who will likely have to rely on 17-year-old Mason Greenwood to deliver, as he did against Astana and Rochdale in the cup competitions.