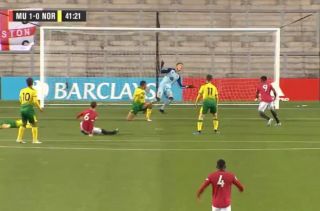 We have a close eye on the U23s at the moment because you never know who is next in line to feature for the first team. Ole Gunnar Solskjaer has made it clear he believes strongly in youth development and giving young players opportunities.

After losing 4-1 against Aston Villa last time out, United’s U23s are looking to return to winning ways tonight, as they host Norwich City at Leigh Sports Village.

United went on 1 up at half-time but Norwich appear to be getting closer in the second half to finding an equaliser.

The opening goal came from James Garner, who passed the ball calmly passed the goalkeeper coming in from outside the box.

There is a lot of talk about Garner. Although he is yet to feature for the senior side this season, he’s one of the names constantly referenced as one ready for his chance. He took his goal well, as you can see from below (footage from MUTV):

The central midfielder should be looking at the first team now thinking now is the perfect time to impress. Scott McTominay quickly broke out of the academy and into José Mourinho’s plans and is not a regular in Solskjaer’s team, so that should give young Garner plenty of inspiration.

If you’re good enough, you’re old enough. That’s what Solskjaer has been telling the youngsters at United and we hope he sticks by that. His faith in the youth is already paying dividends in 17-year-old Mason Greenwood, who has two goals in two senior starts this season.

Others like Angel Gomes, Tahith Chong and Brandon Williams are also getting a chance to make their mark on the first team.