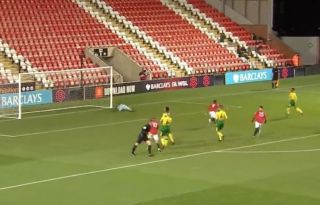 The penalty came about 20 minutes into the second-half after United were put under pressure from Norwich’s intensity.

United kept Norwich at bay but the visiting side had a number of opportunities to score an equaliser before United doubled their lead.

The penalty was rewarded after Anthony Elanga went on a brilliant run before being taken down inside the box.

Watch below (footage from MUTV):

Hopefully the lads will be able to hold on till the end. Norwich look a bit rattled now.