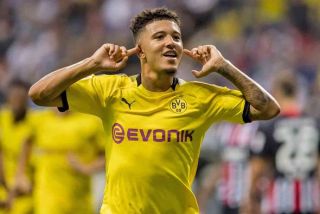 There is a brilliant piece on Borussia Dortmund’s sensation Jadon Sancho published on ESPN this week, by Bruce Schoenfeld.

It suggests that the 19-year-old England international will be football’s next superstar.

Schoenfeld, who adds lots of detail to Sancho’s career to date, states that this season in the Bundesliga is ‘almost certain to be his last’.

There was talk last summer after Manchester United made its intentions known, but Dortmund director Michael Zorc advised the winger that the time wasn’t right.

Sancho signed a new deal in August but nobody is under the illusion that he will see out the contract. It allegedly pays him more than €200,000-a-week which is a lot for a player his age.

Sky Sports pundit Paul Merson believes United need to go on a spending spree over the next four or five windows’ to catch up with their Premier League rivals, as per The Metro, and thinks the club should begin with a move for Sancho.

United would probably have to smash their transfer record for the England forward, but it would help the club if Champions League football was secured for next season.

Sancho will have plenty of interest and the Europa League is not likely to appeal to him now he’s playing in the Champions League.