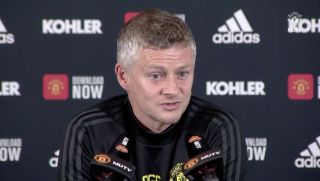 Manchester United could be without Paul Pogba, Anthony Martial and Marcus Rashford for Monday night’s Premier League clash against Arsenal.

Martial has been out for over a month and Rashford picked up a groin injury in the 2-0 defeat against West Ham, while Pogba has a severely swollen ankle from the midweek win over Rochdale.

That should see Mason Greenwood start against the Gooners being the only recognised striker available to Ole Gunnar Solskjaer.

Luke Shaw returned to full training this morning and will be assessed before kick-off on Monday night.

“Er… not really!” Solskjaer said when asked if he had any positive team news, as quoted by the Manchester Evening News. “Luke’s back in training today, so let’s see how he is. He’s getting there so let’s see how he reacts the next couple of days. He’s been working really hard, so we hope to see him before the international break. Maybe Monday, but not too sure.

“Rashford and Martial? I wouldn’t put my life on it but that’s part of this game, you work with what you have and we’re looking forward to this game.”

It will come as a surprise to many to hear Pogba picked up another knock during the week and is a doubt for the game against Arsenal.

Solskjaer continued: “Situation is he finished the game, 90 mins, fantastic but he got a knock to his ankle which is very swollen so was better not to go there with the team and he’s in a race for Monday. Doubt? Yes, but that’s just the way it is.”

That might explain why Pogba didn’t take a penalty on Wednesday, rubbishing claims from The Sun that the Frenchman felt Solskjaer snubbed him for the shoot-out.

On Greenwood, Solskajer was careful not to give too much away about his team selection. He was asked if the 17-year-old is ready to start in such a big game?

“It might be, he’s proven when he’s been on the pitch, Astana and Rochdale, when you get him in the box he’s dangerous. What’s pleased me about him is the doesn’t turn down chances to finish when you’re not 18 yet and you keep trusting yourself. So I’m not worried about him at all but we’ve managed him, can’t just throw him in the deep end all the time he’s proved in those games he’s ready for it. I’ll have the weekend to think about it.”

The press conference was shown live on MUTV.