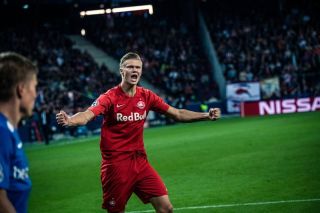 Red Bull Salzburg striker Erling Braut Håland favours a move to Manchester United or Juventus when he leaves the Austrian club, it has been claimed in Italy.

The teenager became a professional under Ole Gunnar Solskjaer at Molde and he grabbed the headlines in the summer when he scored nine goals in a single match at the U-20 World Cup.

Håland’s stock went up again when he netted a hat-trick in his Champions League debut while playing for Red Bull Salzburg.

Now you can be sure he’ll be on a number of top European club’s radar over the coming months and into next summer’s transfer window.

According to Italian outlet TuttoJuve, the striker is interested in signing for either United or Juventus.

Håland is said to want to follow in the footsteps of Zlatan Ibrahimovic and play for either of the two European giants.

Ole’s already coached him at Molde.

Is he the type of player United should be looking at for next summer? Remember, we already have Rashford and Greenwood.

Here’s hoping his relationship with Solskjaer influences his decision if it comes down to that.

With 17 goals in ten games this season, Håland sounds like the real deal.