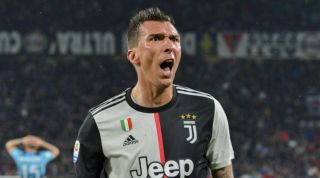 Manchester United are paying a heavy price for not signing a striker this summer, having sold Romelu Lukaku and loaning out Alexis Sanchez.

Ole Gunnar Solskjaer only has Anthony Martial and Marcus Rashford to fill the void, with the crucial no.9 role up for grabs, and neither has proven in their short careers that they’re a regular goalscorer a club like United need.

There’s 17-year-old Mason Greenwood doing all that’s been asked of him, but he’s not ready for key role just yet. Solskjaer knows he must manage his young talent carefully.

It seems another move for Juventus striker Mario Mandzukic is on the cards in January.

United were linked with the Croatia star during the summer transfer window, but a deal never materialised, and he presumably regrets that given Maurizio Sarry doesn’t seem to fancy him.

And now journalist Enzo Bucchioni claims Manchester United have been in contact about a move once more.

“Mandzukic, on the other hand, does not seem to be planning to go to Qatar,” he told TuttoJuve.

“He prefers to stay on the sidelines, not play until January and then move on to Manchester.

“They’ve contacted him to replace the injured Rashford and make up for the sale of Lukaku and Sanchez. Three months in the pits to restart.”

Everyone just needs to come to terms with Rashford not being a no.9. To build on his game and develop further, it’s time we started using him as an outlet out wide.

It just makes sense for his career at club and international level.

That’s why I’d argue Mandzukic, 33, should not be seen as anything more than a short-term fix. We probably won’t get anything better in January so it’s a risk worth taking, though to suggest he’d arrival and replace Rashford indefinitely seems far-fetched.