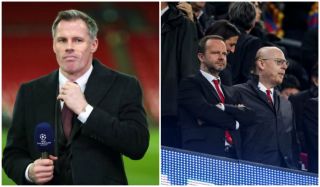 Jamie Carragher has hit out at parasites Ed Woodward and the Glazer family.

It has been claimed by the Evening Standard that United have ended their search for a director of football due to being happy with how the transfer window went in the summer.

That means Woodward will keep his infamous power on United’s transfer dealings and that’s certainly not a good thing for the football club.

Several candidates were drawn up for the role and reported in the media, with some former players thrown into the mix: Rio Ferdinand, Edwin van der Sar and Patrice Evra.

Former Liverpool centre-back Carragher, who cares as much about United as we do about Liverpool, claims that in Woodward apparently opting to overlook sensible candidates shows he cares more about “image over substance.”

The Sky Sports pundit adds that the Glazer family tolerating this approach suggests they do not care about Manchester United’s results on the pitch, but that is no surprise to anyone.

They never cared as long as they can milk the commercial cash cow.

The Glazers & Woodward are a shambles but Ole is not the cure.

Carragher wrote in The Telegraph: “Most recently we have witnessed Woodward acting like a United superfan, apparently meeting a series of club legends who might take on the position of sporting director.”

He added: “None of those mentioned have any experience in such an important role in modern football. It smacks of image over substance.”

On the Glazers, Carragher wrote: “Responsible owners would not tolerate this shambolic approach to running their club, leading to an obvious conclusion.

“The Glazers do not care because United are making money regardless of what is happening on the pitch.

“In such a world, a pitiful defeat at West Ham – the most important event in the week for die-hard United – can be bracketed as a ‘short-term distraction’ by their chief executive.”

Although Carragher is Liverpool through and through, he speaks like a football fan here. It’s sad to see such a big football establishment being driven to ruination by a bunch of businessmen who don’t care about the club or those it follow the team every week.

To them we are customers. Nothing than that.