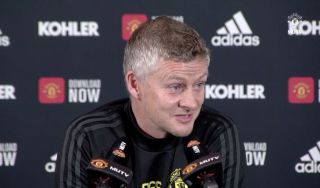 Manchester United don’t look better than we were last season, but Ole Gunnar Solskjaer has bullishly claimed the team is ‘improving’ under his management.

United finished sixth this season and would have came further down the table if it wasn’t for Ole Gunnar Solskjaer picking up on the terrible form under José Mourinho.

However, that’s not the entire story of Solskjaer’s first few months in charge of the team. Results worsened towards the end of the season and the Red Devils missed out on a place in the Champions League.

Neither Ander Herrera or Romelu Lukaku were replaced in the summer and, although the new signings have done well to date, United certainly look worse off without those two players.

I’m not suggesting both players should have been kept – but to go into the season without replacing them was a mistake. One everyone could see effecting our season before it began.

Solskjaer was asked at Friday morning’s press conference to describe his team.

“In my own words: it’s a team improving, evolving, a young team, the culture is there I see them every single day in training and we don’t have any issues with attitudes, with work rate, with desire, now can we trust ourselves, you can see against Astana and Rochdale they want to impress, do well and maybe they rush their finish at times. It is getting there.”

Quotes from the Manchester Evening News.