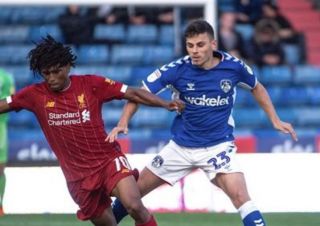 A former Manchester United player has been locked up for eight months after he tried to getaway from police in a 98mph road chase after they caught him using his mobile phone at the wheel of his car.

Callum Dolan had just signed for Oldham when he borrowed a friend’s Renault Clio due to running late for training.

Traffic officers spotted the midfielder texting at the wheel of the car before he sped off in attempt to lose them.

Dolan then crashed the car into some railings before being arrested after a short chase on foot.

The Mirror claims he was wearing his club tracksuit whilst muttering the following reaction: “I’m f****d – how long will I get for this?”

It gets worse for Dolan because he was already banned from driving for another police chase when he was caught drink driving.

He has since admitted dangerous driving and driving whilst disqualified, but attributed his behaviour on a disruptive upbringing which saw his father take him on raids when he was only 11.

Dolan knew what he was doing and there’s no excuse for anyone carrying on in such a way.

We hope he learns from his mistake and takes his sentence seriously.

At 18, Dolan’s still has every chance to turn his career into something.

And hopefully the next time we talk about him it’s something more positive than getting in trouble with the law.