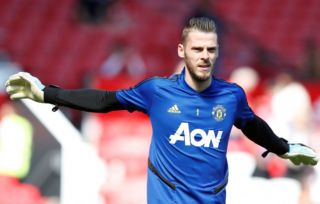 The Reds have endured an awful start to the season, continuing their poor form from last season which ended in a whimper.

Despite additions Aaron Wan-Bissaka, Harry Maguire and Daniel James all settling in well, United are struggling with a lack of fire power up front and have scored just six goals in the last seven games.

Solskjaer’s men currently sit in eighth position in the league, and narrowly escaped a disastrous cup exit against Rochdale on Wednesday night.

De Gea, who recently signed a new long-term deal to remain at Old Trafford until 2023, has full faith in Solskjaer and vows that his players will keep fighting for the Norwegian.

“[Solskjaer] is part of the family, he was here for many years as a player, he knows the club well and most importantly the whole team is behind him, we will fight to the death for him,” he said on DAZN, as quoted by Manchester Evening News.

“That is key, he is a good coach and we will be with him until the end.”

The Reds face Arsenal on Monday night in what is a crucial game for Solskjaer’s side if they have any ambition to reach the top four.

Anthony Martial and Marcus Rashford are both ruled out of the clash through injury, but Luke Shaw could return after taking part in first-team training on Friday.