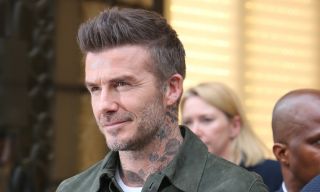 Manchester United legend David Beckham reportedly looks set to move into agency work and one of his first targets is set to be Mason Greenwood as a potential client.

That is according to the Mirror, who state that Becks has been listed as a director of a new company called Footwork Management Limited.

The report adds that the former iconic no.7 at Old Trafford is looking at United youngster Greenwood as a talent to put on his books.

It is also claimed that Becks had some involvement in Bayern Munich’s pursuit of Man City star Leroy Sane over the summer.

The former England international has his fingers in a number of pies currently, and let’s not forget the creation of club Inter Miami which is due to join the MLS in 2020.

There has already been some exciting names linked with moves to Inter Miami such as David Silva, as per The Sun, which would be a huge coup adding potential growth to a Hispanic section of the new club’s support.

Becks is certainly a player I would trust with young players like Greenwood. He knows what it’s like to come through as an emerging star at United, and I’m sure there are things he seen in his career that he could prevent happening others.