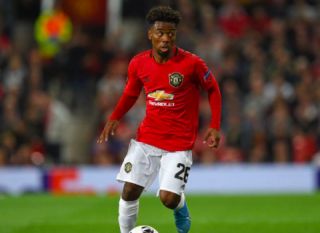 Angel Gomes could have provided the creative spark Manchester United were missing against Rochdale last night.

Ole Gunnar Solskjaer’s side had 31 shots at Old Trafford, but lacked the cutting edge to dismiss League One opposition within 90 minutes.

Instead, the Reds had to rely on penalties to go through to the next round of the Carabao Cup where they will play Frank Lampard’s Chelsea at Stamford Bridge.

Some United fans had questioned the 19-year-old’s omission from Solskjaer’s squad, as it would have been the perfect opportunity to give him minutes against lower league opposition.

However, Solskjaer confirmed after the game that he and Diogo Dalot were both ruled out through injury and will not be fit for the game against Arsenal at Old Trafford on Monday night.

It’s a blow for Dalot and Gomes who would both have probably started the game against Rochdale and looked to impress.

The pair may get the chance to start away to AZ Alkmaar in the Europa League group stages next Thursday.

Solskjaer on United injuries:
Gomes and Dalot: "They haven't trained last couple days, unfortunately. Hopefully back for Alkmaar next week."

Rashford: "He is recovering, he is not very, very bad so hope to see him before international break." #mufc